Welcome back to another installment of Random(‘s) Thoughts about Duelyst! This time around I want to talk about my favorite card. Like probably most people the things I find the most entertaining with playing games rarely fall into te competitive category. That isn’t to say that the competitive builds or cards aren’t fun, but there is something especially satisfying about pulling off a silly combo, windmill slamming a huge beastie, or witnessing the stunned silence of your opponent as they stare at what you’ve just accomplished.

So what if I told you that you can do all of those things? Enter Horror Burster

Whoever wins, we meme

I’m sure many of you out there enjoy the Alien and Predator movie series. If you don’t, you need to seriously reevaluate your priorities. They’re awesome. If you aren’t familiar with them for some bizarre reason. The xenomorphs in the Alien movies (and in the Alien vs. Predator movies) have a unique life-cycle. They are hive-minded creatures with a queen who lays eggs. The eggs don’t hatch directly into more xenos however, they instead produce a facehugger. The hugger just wants to love everyone, however in doing to it literally attaches to your face and chokes you into unconsciousness so it can implant a xenomorph embryo. Once the process is complete the facehugger will detach and die off leaving the host “intact”. Unfortunately, sometime later the host will “birth” an aptly named chestburster directly through their sternum. Pretty scary, but these creatures make for excellent movie monsters. They also make for very entertaining games. Years ago, there was an Alien vs. Predator CCG that let you take on the role of a solo hunting predator, an alien hive, or the colonial marines. Later in an expansion the rogues, cloned aliens, and hunting pack were added as factions. Even more recently the revived VS system (now VS 2cpg) introduced the xenomorphs at last year’s GenCon. Personally, I was ecstatic.

What does this have to do with Duelyst? Well as you can see our horrifying friend up above resembles those famous movie monsters and lets you have a small taste of what it’s like to run the alien hive.

Let’s be real for a second. The card can certainly do some hysterical things. But like my dad used to say, “anything good in life requires hard work”. Well our creepy crawly friend is the good stuff, but wow do you need to work hard.

First off, we should look at the horror that is produced. Now that is one chunky dude! Fun fact about the lore for Duelyst. In the Abyssian faction: all the human looking characters are female. All of the males are horrific monstrosities. Check out the codex and card lore entries in game to find out more! Short digression aside a 6/6 on turn 2 or earlier can be an incredible asset. That much should be readily apparent, however something that may not stand out quite as obviously is the little word “transform” on the first half of the card. Transform effects in Duelyst are important. They function as pseudo-dispels. If there is a buff or debuff on a card it will be removed when it transforms. While this doesn’t come up all that often in most of my burster based builds (alliteration, hah!) it is something to keep track of.

Since the effect is random you do need to be careful about when and how you use the burster. He finds himself at home in swarm oriented decks so you can ensure you have a target to evolve to. A common tactic against burster is to simply remove all your potential horror-hosts and then deal with the 4/1 itself. That’s where the swam lists come in. If you slap down enough bodies your opponent is going to need a different way to address Mr. Many-Legs.

The memes are coming out of the walls!

One option for building the deck is Cassyva. That being said, an argument could be made for Cassyva. One of the difficulties you’ll encounter when deploying Horror Burster is getting him to trigger at the appropriate time. If you do not pop him right away you run the risk of your opponent playing a sweeper and ruining all the fun. Cassyva’s ping effect can target your ow 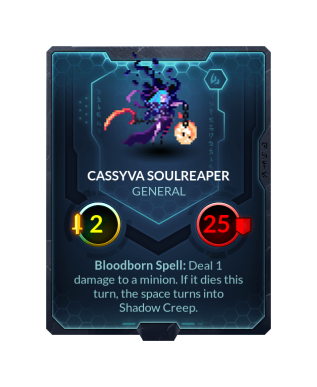 n minions so you could end your burster’s first life and get the train rolling on the sweet 6/6 action. You even get a free creep time if that tickles you.

Still, you are probably better off with where we started Lilithe Blightchaser. Wraithlings seemingly love becoming bigger, there are tons of ways to make them grow, and in this case some of them just want to level up and evolve into a gigantic hulking abomination.

From here the deck sort of builds itself. Really the biggest choices that need to be made are what “staples” are you going to cut from a traditional swarm list. In my case I trimmed some numbers and cut some the other cards that piggy-back on having a ton of minions out. Soul Grimwar is great for making your general a very lethal threat but we are going for the lols here so something had to go. That being said there are certainly other places that you can look to make room.

My initial lists when our friend was first released had a much bigger emphasis on the all-in play. That is to say that I included Darkfire Sacrifice. It has since gotten the axe to clear room for more universally useful cards. The unfortunate part is while it enabled super early horrors, topdecking it late was the epitome of feels bad moment. Also, way back then Grandmaster Variax cost less so you had something else to ramp to. At this point, aside from Spectral Revenant, you top out at 4 mana generally. I’ve been experimenting with Necrotic Sphere since there are a lot of arcanysts and golems running around with big backsides but it certainly isn’t required.

Horror Burster can hardly be called optimal. It requires a number of things to go your way from the start. You need a host (hopefully they don’t clear it), you need your opponent either allow it to live while staying in range or charge into it (and hope they didn’t dispel it), there are a number of both sweepers and transform effects that can prevent the burst from happening, and it needs to be at a relevant point in the game. Even assuming all that goes correct a 6/6 can be dealt with via a number of ways including simply playing a bigger minion.

All that being said the card is a lot of fun. Additionally, it provides some strategic options. The element of surprise is a thing. Frequently you can force your opponent to panic since they need to constantly be trying to deal with your swarm without touching the landmine that is Horror Burster until the appropriate time. Plus, there are several cards you may want to protect from dispels or transforms. There was an old concept in Magic that surrounded the card Disenchant. It was a spell that would let you destroy an artifact or enchantment. Since it only cost 2 and clearly versatile it was almost always run in decks that could support it. As a result you could pretty much expect that your opponent was running them. This pushed a lot of deckbuilders to go in 1 of 2 directions: The first path is to just drop every artifact and enchantment from their deck. That makes those Disenchants useless as they can’t target anything. The second option was to overload their ability to answer your stuff. If you have way more threatening targets than they have answers…well some of them are going to stick. A similar approach can be taken here. Most swarm lists run some combination of deathwatch or other targets you want to dispel/transform: Bloodmoon Priestess, Shadowdancer, Deathfire Crescendo, Furosa, Spectral Revenant, Vorpal Reaver, Reaper of the Nine Moons, Shadow Sister Kelaino, and the list goes on. Point is adding Horror Burster to the list means your opponent has to have yet another specific answer to prevent you from generating a big benefit. Granted maybe you’ll accidentally turn the wrong card into a colossal beast, but thems the breaks.

In the future I do want to try even more meme-centric builds with horror burster. Instead of going the swarm route you could instead try to make sarlac and gor work. 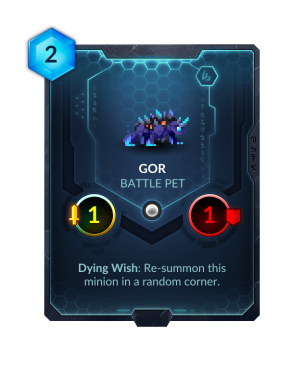 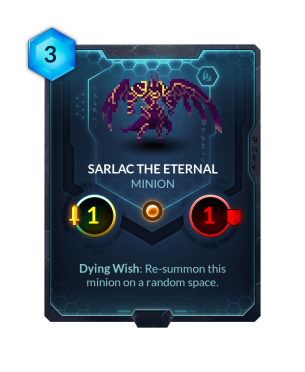 These two are super difficult to remove and will probably be around to turn into prodigious fiend. Combined with some recursion elements like Consuming Rebirth and Keeper of the Vale there might be something to work worth.

Until next time dear readers, just remember if you’re on a distant planet and you come across a room full of strange eggs…you prooooooobably don’t want to touch them.

Unfortunately I have not had much luck with the Gor/Sarlac based builds. Gor is supremely reliable, which while normally a good thing, he ends up just making your horror start on the other side of the map in many cases. Sarlac isn’t bad since you can accomplish a lot and abuse his recursion, however the transform means that you lose out on all that. It’s a similar problem to playing the burster in Lurking Fear centric decks. While you can roll the dice and hope the burster doesn’t consume one of your good minions it always seems to happen at the worst times. Next steps around going to be trying to balance swarm with sacrifice outlets to see what can be accomplished on that end.