Originally this article was going to be a write-up of my efforts early in the month to climb the Duelyst ladder with rocks. A very specific kind of rock: Vetruvian Rocks. However it didn’t really go that well. I made it to diamond, which is my goal every month (the rewards for S rank aren’t worth the time to me), but it took more games than I was happy with and I ended up switching archtypes as I just found them underwhelming. There were some  great games but on the whole it felt that the deck had some weakpoints, Achilles’ heels if you will, that could not be ignored. Unfortunately these particular weaknesses manifested in 2 of the not only most popular but best decks.

Naturally this made for a depressing climb.

I was all set to write it up anyway when real life got intervened and I didn’t get to put pen to paper (or more aptly finger to keyboard) until now. Since there is bigger Duelyst news (https://news.duelyst.com/duelyst-patch-1-86/) I decided to shift gears and revisit good ol’ rocks another day.

Overall I think this patch is a positive. There are some notable gameplay changes, some quality of life changes, and a promise of more cool stuff to come. The downside is that it doesn’t address everything, but that is expecting too much. Let’s go top to bottom, taken directly from the link above:

Circulus – Health decreased from 3 to 1. 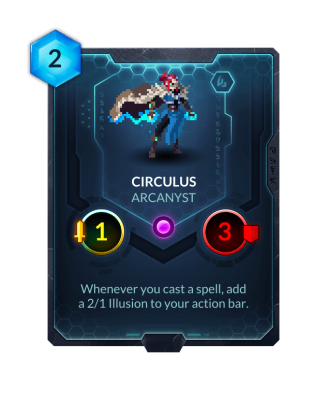 Circulus is a card that flew under what I’d like to believe was everyone’s radar when Ancient Bonds was spoiled. However the power is undeniable as he is essentially a 1/3 for 2 that not only activates and/or benefits from all your arcanyst synergy, it turns out drawing 2 cards a turn for “free” is pretty good. This draw engine is almost entirely self-sustaining since you get a free replace each turn so those 2/1’s for 1 that are cluttering your hand go back into the deck and can become a better card (it could even be a spell!). Or feel free to keep them and flood the board with more arcanysts which can be buffed or allow for bond allies 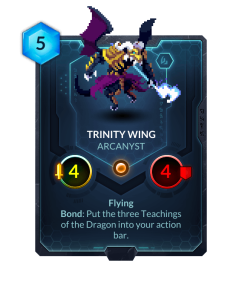 like Trinity Wing here to do their thing. As you would imagine this combined with a ton of Vanar targeted removal, dispel, and even AoE sweepers led to a meta found stifling. Combo and aggro are typically seen in card games as the archtypes that are oppressive, however control is not exempt. That being said I personally did not find the decks all that bad. I think they were very good, but I have found the general trend in the digital card game space is that people expect developers to be balancing on the razor-edge on a nearly hourly basis.

Was Vanar too strong? Potentially. It certainly was the best deck. In my experience I personally didn’t find it unbearably frustrating to play against, although I can certainly understand why many found it that way. There are a number of things that could reasonably take Vanar down a peg or two while maintaining a healthy game. There are several cards that could be targeted for nerfs and they would still be very much playable. That’s a seemingly obvious indicator that something should be addressed. Additionally a new set is just around the corner according to recent news items so the meta was going to have a few natural tremors. Still, if something was going to be done I am surprised there weren’t other things that were tagged including cards that aren’t in the Vanar faction (coughlavaslashercough). Circulus needed to be addressed for sure and the health change does help. Now without an owlbeast to pair with him the value generator is susceptible to Bloodtear Alchemist as well as a bazillion other ping effects. Plus the loss of 2 health means an Owlbeast Sage activation just to get him back to his old stats. Not insignificant and will hopefully allow for factions to be able to address a well hidden Circulus. it will also be interesting in the mirror since now Mana Deathgrip can take him down on its own.

This spell is actually the card I was surprised was not touched. I think I’d play it if it was simply “2 cost, gain 1 mana crystal”. Crystal Wisp had seen play in the past already! If this was “2 cost, deal 1 damage, if the target dies gain 1 mana crystal” I am pretty certain it’d still see significant play. An extra mana makes it clunkier however if you look at other card games with a mana system a 2 mana investment to jump 1 place in the curve is pretty common, Magic has Rampant Growth and a million other effects that are similar. Hearthstone has Wild Growth. While Duelyst is very different the mana system is pretty close to those games, you get +1 resource a turn, you expend those resources to play cards. Being able to advance a level is pretty big, slotting in virtually any turn is even bigger, getting an added bonus of doing damage is huge. I’ll admit sometimes the requirement can be difficult to enable but it isn’t all that tough. That’s ignoring the fact that at worst it’s pay 1 deal 1 which due to spells having unlimited range can be pretty important.

Again, I think that there were a number of ways to go about dealing with the dreaded Vanar Arcanyst builds including but not limited to these nerfs and some buffs for other factions but I do find it curious how things were handled. We’ll see how the new set shakes out.

Balance updates weren’t the only changes we are also getting a feature that will make building and showing off decks a little easier. First off there are additional filters for when you queue to play. While not the most earth-shattering development it is very welcome. The bigger feature (to me) is the collection update that includes a deck importer/exporter. Screenshots and retyping lists aren’t a crisis by any means however this will definitely help share ideas. Barriers regardless of how small are still barriers.

Just a quick write-up this time around. The roadmap still has the mobile betas there and mentions the new expansion is coming. Still exciting things in store for the world of Duelyst. With the new set on the horizon it seems a little silly to make any drastic changes to cards even if some seem overdue, but the one that has been made should have a noticable impact. It’s great that there are going to be tools to help share intel among players and I hope that in client tournaments will make an appearance despite not being on the roadmap.